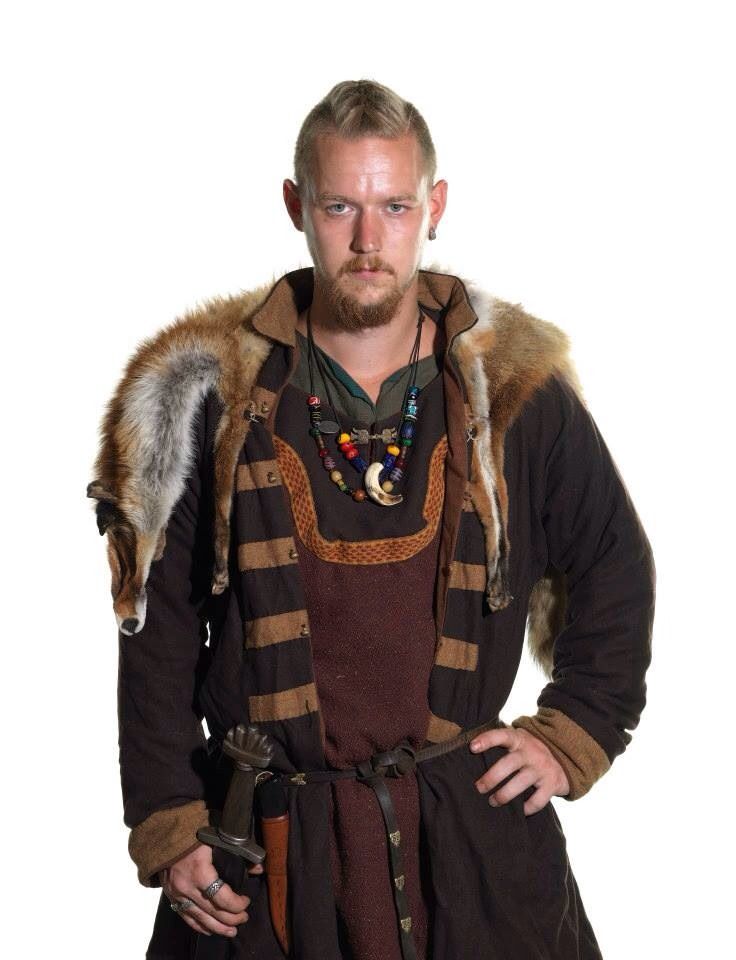 The men would dress in tunics and leggings in several layers so they would be warm or would cool off in summer.

Viking Clothes - What did the Vikings wear?

They used darker colors in winter, lighter natural colors in summer they didn't have air conditioning, other than the natural kind! Shoes, when they wore them, were made of the skins of animals that they had raised and used other parts for food, utensils, cups, and many other things.

To top Did the clothing vary between the richer and poorer Vikings?


The higher classes wore clothing made from linen from the flax plant , wool from sheep and in some cases silk imported from Asia. The reasons for this were money and land availability. If a Viking had a large enough farm with slaves to run it, he probably had enough land to grow flax and have large herds of sheep. He was also making enough money to trade those and other items to buy very expensive silk.

As a result, he had enough clothing for several outfits of different kinds.

The lower free classes wore mostly wool and linen since the money for silk was not available. Linen clothing was common but not as common as wool due to the fact that sheep are easier to "grow" than flax, and can survive in much harsher conditions. Slave classes mostly wore coarse wool garments that frequently were hand-me-downs from their masters or other people. Linen was too expensive to waste on them. The exact types of clothing that were worn during the Viking Age varied by region and season, but below is a general answer: Men and boys wore a tunic, trousers, shoes of leather if wealthy enough , socks, and usually a belt.

In the winter they wore an extra tunic and wore either a woolen cloak or a type of primitive coat closed with a belt. Women and girls also wore a tunic, but instead this garment was dress length. Women of higher classes also had one different garment that they wore over their tunic called a "hangerok" or "apron dress". This garment was usually shin length and fitted to the body.

It looked very much like a "jumper" style dress with straps over the shoulders that were attached in the back a pinned in the front with brooches. There are many variations on this garment and historians argue over which one is correct. They also wore shoes, belts, cloaks and coats. Women and men of higher class however, wore more jewelry than those of lower classes. Vikings liked color and nearly every piece of clothing was dyed, which depended on what area they lived in and what plants were available to use for dyes.

They also embroidered and trimmed their clothing with tablet woven braids similar to very wide and flat friendship bracelets. Also, a great website to visit is Regia Anglorum at www. To top How did Viking women dress? Viking Women like the men, the women liked to dress well too. The women wore a loose dress made of wool or linen and used brooches to hold it up.

Sometimes they wore material over this, which was wrapped around the woman, under the armpits. It was held up by two shoulder straps that were fastened with oval brooches, sometimes called 'tortoise' brooches because of their shape.

What do we actually know?

This over-dress often had a band of decoration at the hem. Women carried things they needed, e. Married women covered their hair with a scarf. Cloth leggings or some kind of sock were also worn. A woolen sock dating from the Viking age has been found at York, England. It was once white with a red trim and it shows traces of having been patched!! To top What were Viking shoes like? Vikings wore shoes of soft leather. But sometimes they left the fur of the animal on to preserve the warmth.


A leather shoe is made as follows: First the upper is cut from sheep skin or calf skin. Then the sole is cut from cattle hide.

The stitching holes are then punched around the edges of both. Then the shoe is stitched inside out on a wooden foot-shaped block called a LAST , using linen thread or leather thongs.

Vikings wore long, cloth trousers which can be narrow or baggy. They wound strips of leather up in the knee in crisscross patterns. The length of the trousers varied. It could have been used for practical purposes such as in preventing their hair from getting into the food because we have to remember it was mostly women who prepared the meals. When the weather was a bit chilly, the women had an ankle length outer garment, which she wore over her dress.

But the women also used cloaks, which was probably more common and a cheaper option. The front of the outer garment did not have any buttons, but they used a tri-lobed brooch to close it. The fighters used the tri-lobed brooch as a leather strap divider with the leather straps wrapped around one of the shoulders and then attached to a belt, so the fighters could have a weapon in their belt.

Silk was also available for the Vikings, but it was very expensive and most likely only something the rich could afford to buy. Clothes made from silk was seen as a status symbol because it was imported from as far away as Constantine in the Byzantine empire. You might think that the Vikings sat around the fire at night and knitted a pair of socks for their loved ones so they could keep their feet warm.

This might sound like a slow way to do it, but it actually made the socks nearly indestructible, and they would last for many years. When it was snowing outside the people would keep themselves warm by putting on a hood that covered their head and shoulders or a cap, scarf, and mittens. The hoods were typically made from pieces of fabric, and the caps, scarfs, and mittens were typically made from wool and by using the needle-binding method. However, the mittens were also made with animal skin such as sheepskin, and they could even have been made from fur if they had the silver coins for it.

Some people did, however, struggle to keep warm, and not everyone could afford a cap or mittens or even a good pair of socks. The poor people and slaves in the Viking society would use hay or moss to keep their feet warm. In Scandinavia, it does get very cold, and these things are of course not enough, as anyone that has lived in these parts of the world would tell you. The Vikings had also coats and jackets made from wool, they have however mostly been found in the eastern part of the Norse lands, so we can not say for certain that it was widespread throughout all the Nordic countries.

The Vikings loved to walk around in a good pair of shoes, and some of their shoes were quite unique compared to how we make them today. There has been found many shoes from the Viking age, and the reason for this is because, the shoes did not last that long and got thrown into the trash, some the Vikings might even have been purchasing shoes a couple of times a year.

But not all of the Viking shoes are the same and they were definitely not all made in the same style and fashion, however, all of them were made from leather. If we take a look at how the shoes were made by the Viking settlers in York, England, you will see how different the styles could be. Many people from the Viking age were hard workers, so it was more important to have shoes that were practical, instead of shoes that were just made to look pretty. Most of the shoes that have been found from excavations in York are shoes which were closed with stitching on the inside of the shoe, which sounds strange to us today.

But it must have been more practical and more comfortable to work in shoes like that. I wonder if you could tell the social status of a person just by looking at their shoes in the Viking age.

The shoes the Vikings had either buttons or laces, and when the shoes had laces they went around the foot and below the ankle on the foot, to avoid putting on to much pressure on the sensitive parts of the foot. The laces were typically attached to the shoe with strips of leather, and for those who wonder, yes, the people also had the joy of laces snapping from time to time.

The people also wore boots in the Viking age, and some of them had heels, however, it is unlikely that boots with heels were work boots and was probably mostly worn by either merchants or the upper class. The boots where usually ankle heigh, and it was rare to see them any higher, and just like the shoes, the boots had either buttons or laces. Both men and women wore handbags in the Viking age, a handbag would hang in their belt, and some people might have had two handbags in the belt. So they could divide their belongings into what their uses were.

Some handbags might have had small tools in them, others could have had silver coins. 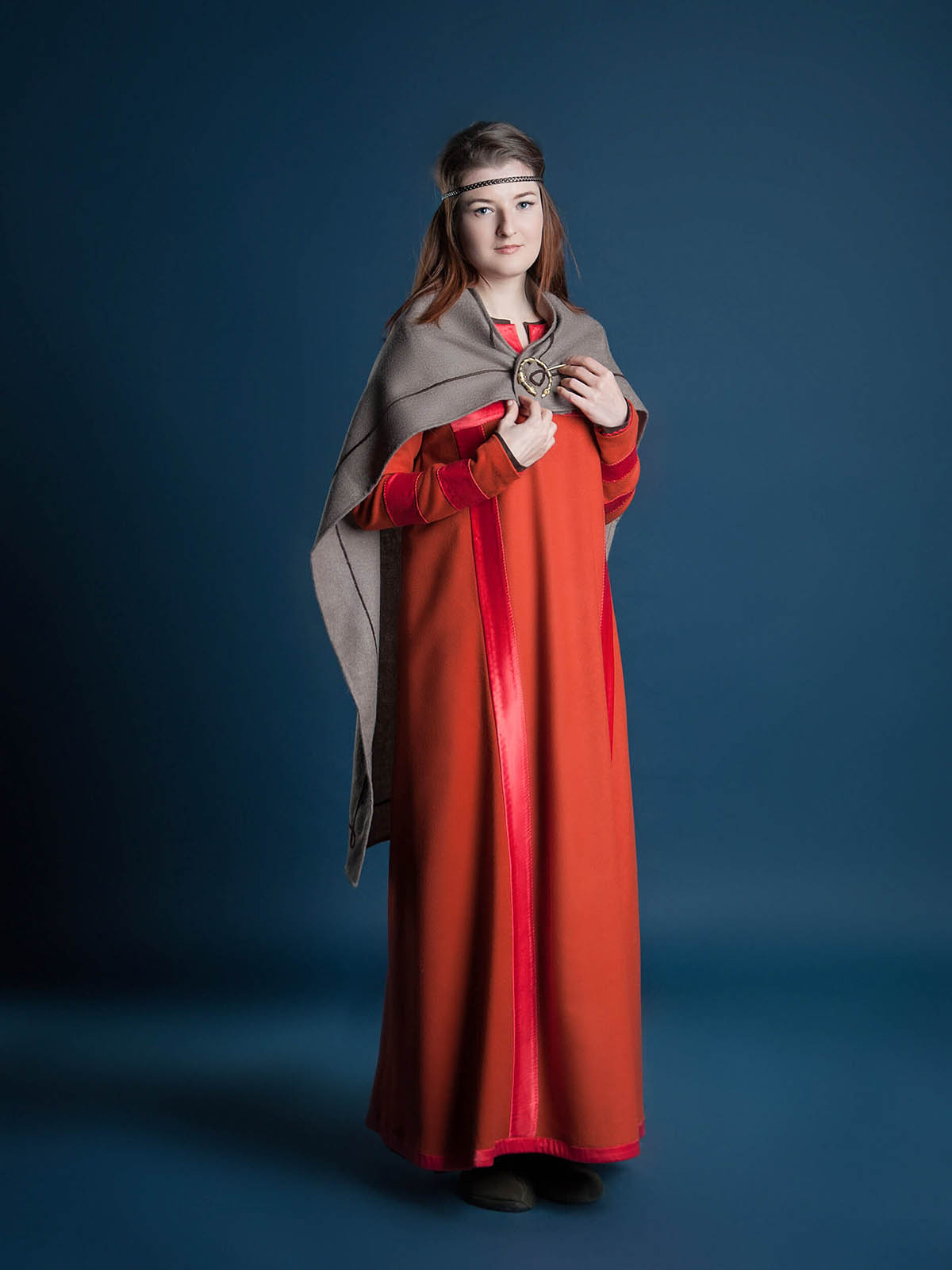 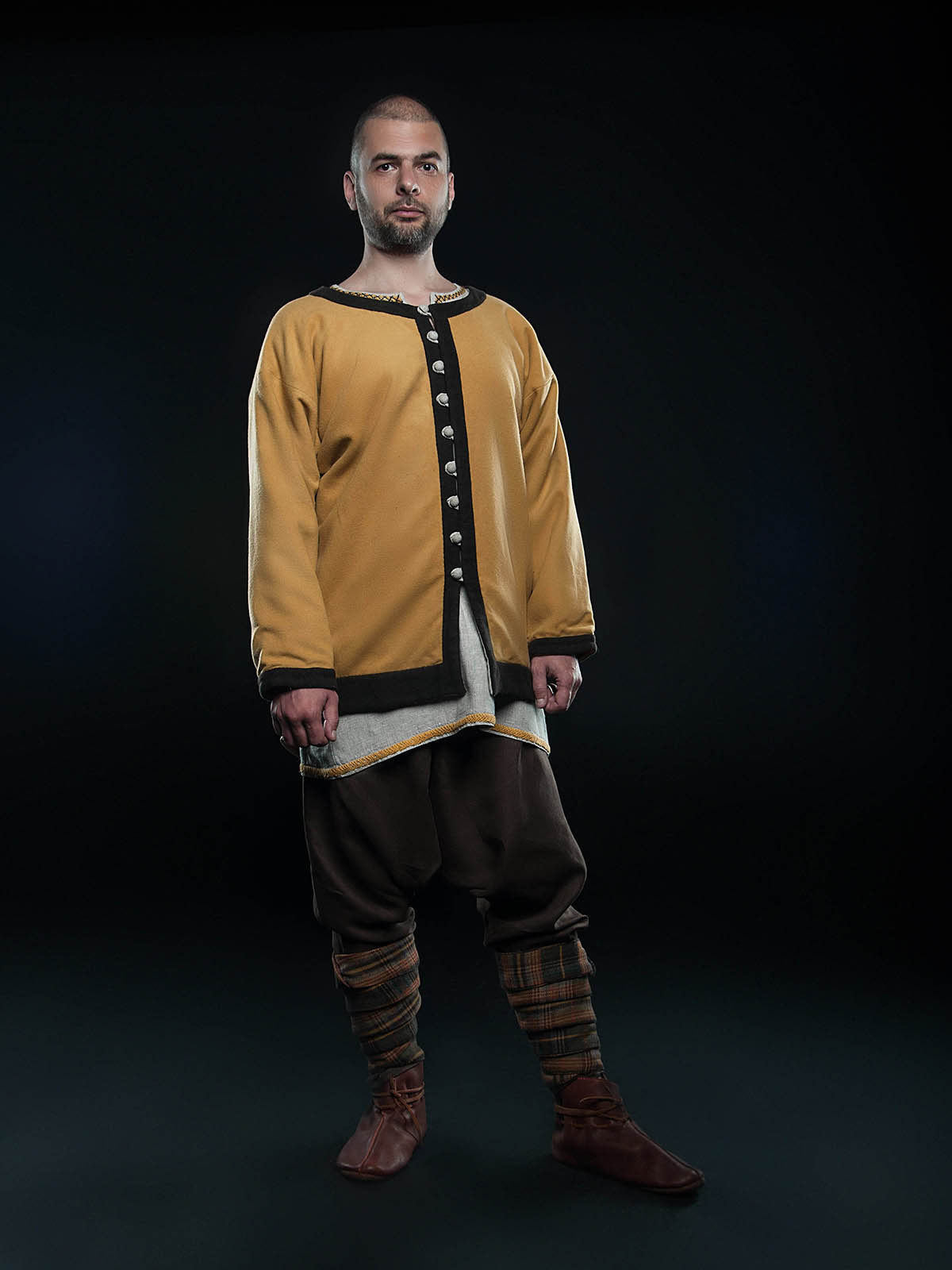 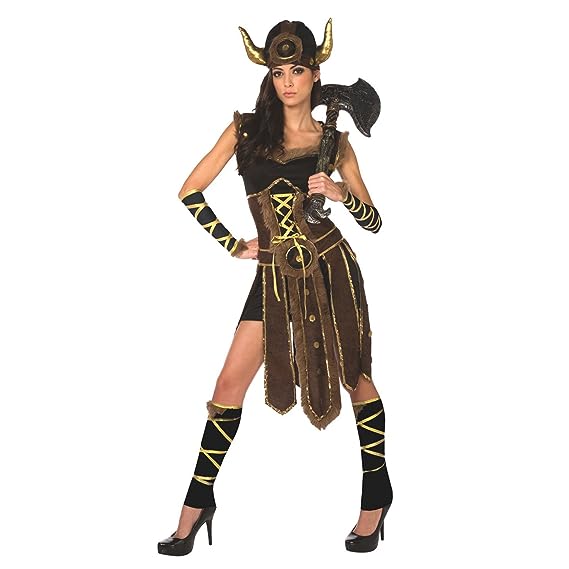 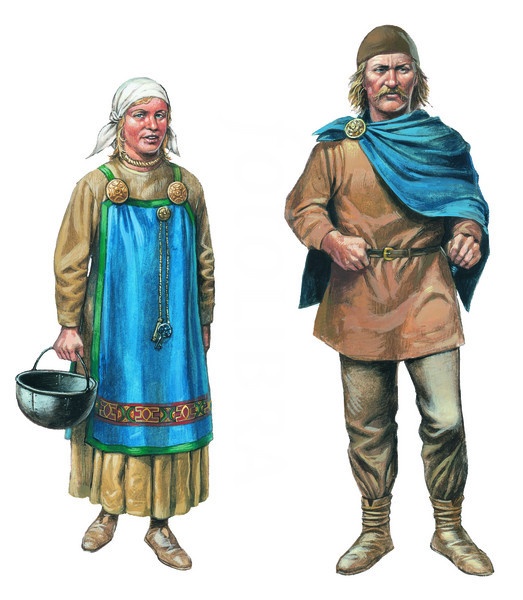 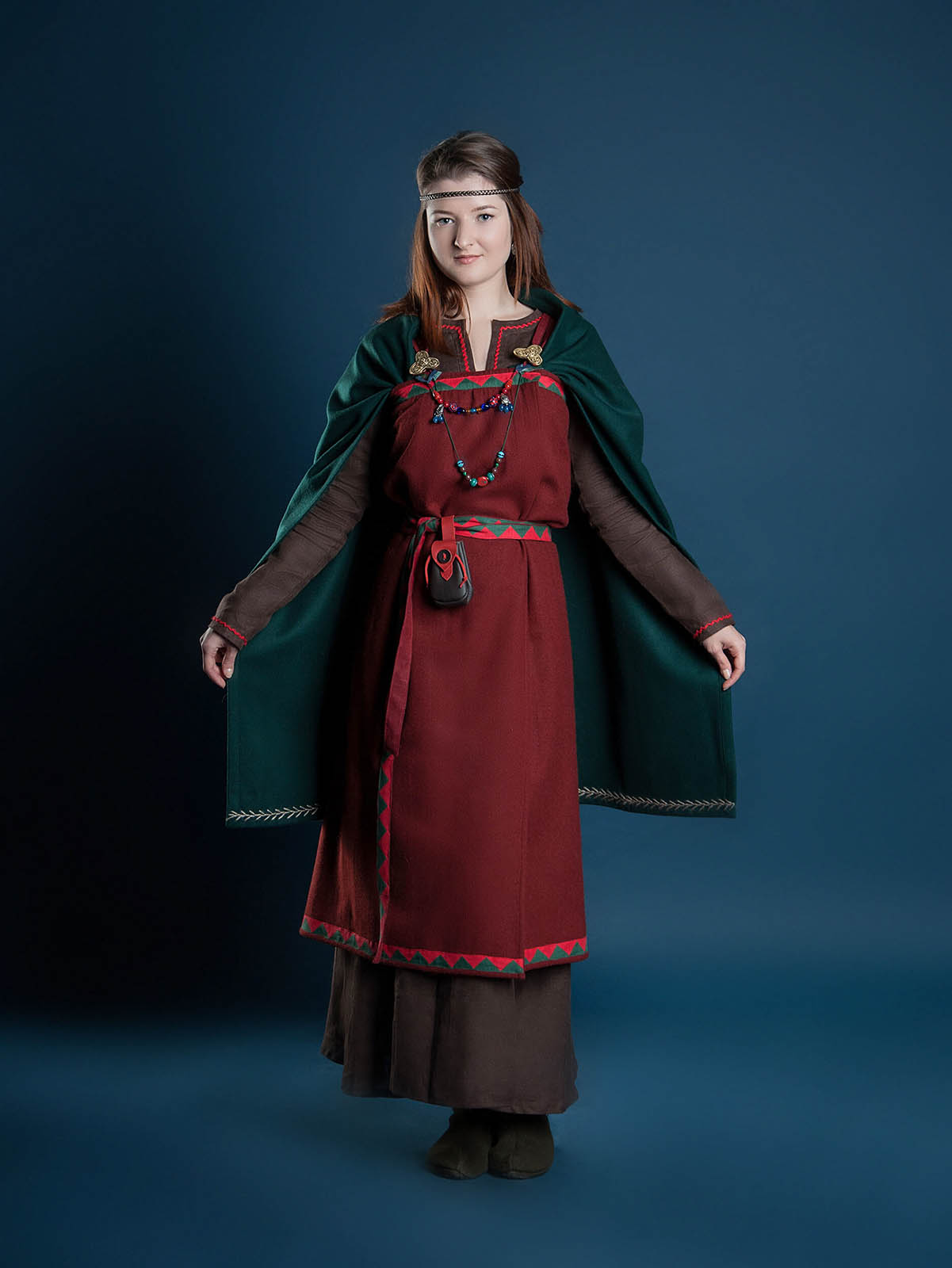